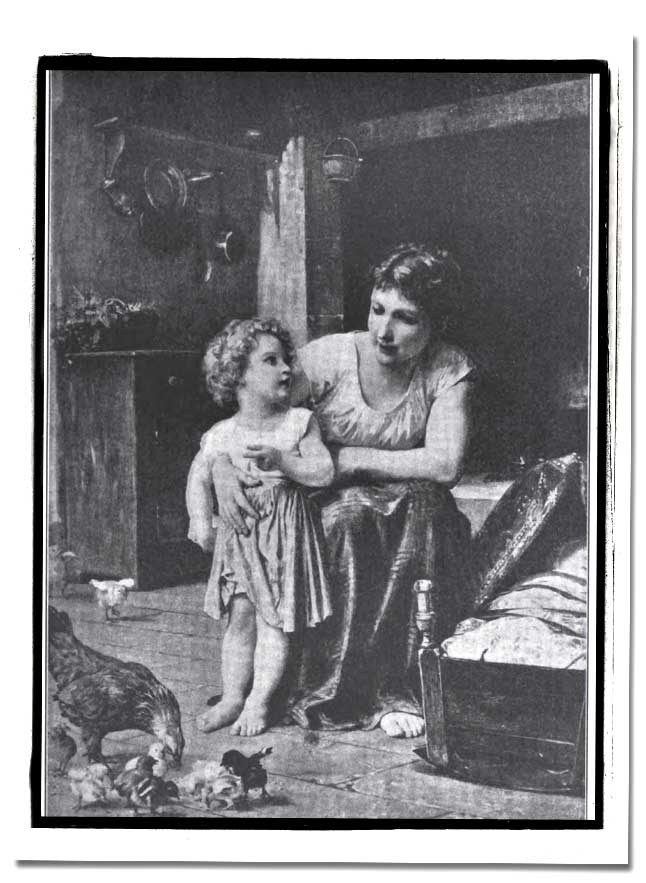 This is a selection about Elizabeth Gardner written when she was still alive.

This delightful and suggestive picture was painted by an American woman, Elizabeth Gardner. She was born in Exeter, New Hampshire, in 1842, but has spent the greater part of her professional life in Paris, where she studied under various French masters, among them Bouguereau, one of whose beautiful Madonnas you saw on page 71. She is now the wife of this artist, and lives and paints in Paris. Her pictures have been warmly praised, especially by foreign critics, and perhaps you are familiar with engravings of some of them. She painted “Moses in the Bulrushes,” “Ruth and Naomi,” “Maud Muller” and that beautiful picture called “Cornelia and Her Jewels.”

The hen in the charming scene here shown is as happy in her way with her chickens, and as anxious to find food for them and protect them, as the pretty human mother is happy with and proud of her little one standing by her knee. I imagine this mother is teaching a lesson to her boy from the hen and her brood, telling him how kind he should be to all dumb creatures, for they can feel pain as we do, and they mourn for their young if robbed of them.

Here is an actual story written by a third grader back in 1915.

October 22, 1915, a Third Grade class in language was visited. The class period was devoted to the study, description and naming of a picture: The Two Mothers and Their Families” by Elizabeth Gardner. The general aim of the lesson was to interest pupils in good pictures and the special aim to teach them to tell stories from pictures. The picture was shown to the class, keeping the name concealed and each pupil had an opportunity to study it. Then the question was asked “What do you see in the picture?” What story have you to tell about what you have just seen?” There were eight good stories told, several very good ones, stories that required thought. One of the best was as follows:

After all the stories had been given, the question was asked: “Which story do you like the best, and why?” After this discussion the teacher asked the class to name the picture. After a short time one pupil gave the name The Two Families. It was decided that the name given was a good one and the class preferred it to the one Elizabeth Gardner had given. The questions asked by this teacher in the third grade threw the responsibility on the pupils, causing them to organize the subject matter. The pupils showed by their faces and actions that there was life, enthusiasm, happiness, and a fine spirit because they were doing something worth while.