I included this short biography for those interested in learning a bit about the author of the poem, Columbus. 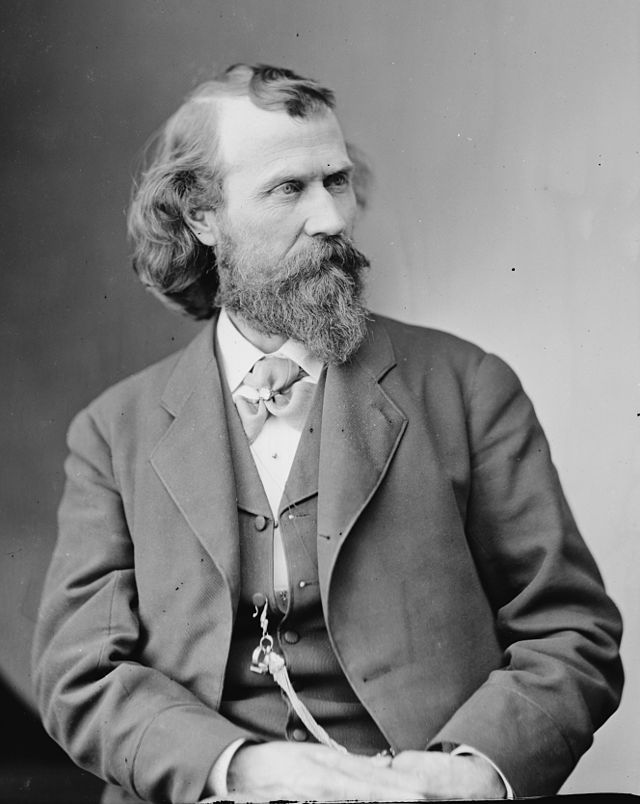 Cincinnatus Heine Miller, better known by the pen-name of Joaquin Miller, was born in Wabash district, Indiana, November 10, 1841. His mother was a cousin of General Ambrose E. Burnside. His father, Hulings Miller, was a school teacher of considerable learning, who removed to Oregon when the son was nine years old.

Young Miller was early sent to the country school, but ran away to California, where he spent two years in the mines, experiencing many hardships. He is said to have been a filibuster with Walker, an Indian sachem and Spanish vaquero. He returned with one hundred dollars, which he gave to his father, and began life where he left off. The school was now Columbia College, and he graduated in 1858, valedictorian of his class. He read law under George H. Williams, afterward Attorney General in the cabinet of President Grant, and on completing his course was admitted to the bar in 1860. In the spring of 1861 he went to the gold mines of Idaho, where he practiced his profession with such indifferent success that he turned express messenger. He returned to Oregon in 1863, and edited the “Democratic Register,” published at Eugene. The paper was suppressed for alleged treasonable utterances, and he resumed the practice of law in 1864 at Canon City, Oregon. The town being attacked by the Snake Indians, Miller marched into the heart of the Indian country, and was rewarded by being made judge of Grant county in 1866, holding his position four years.

He now collected his writings under the title of “Songs of the Sierras,” and not being able to secure a publisher in the United States, he went to London, where he brought out the work. To this he signed the Christian name of “Joaquin,” which he had assumed from having written a paper in defense of the Mexican brigand, Joaquin Murietta, and by which name he is now universally known. He returned to America, but again visited London in 1873, when he published “Song of Sunland” and “One Fair Woman.” He then returned to New York for a time, and subsequently settled in Washington, D. C., where he wrote for various periodicals, but in 1887 returned to California, making his home near Oakland. Miller was a great lover of the Indians. He says in “My Own Story,” “all that I am or hope to be I owe to them. I owe no white man anything at all. The Indians are my true and warm friends.” Although a northern man in sentiment, Miller was liberal and kind in spirit to the south—so much so as to be accused at one time of disloyalty. In addition to the works mentioned he published “Songs of Italy,” and “Songs of Mexican Seas.” He wrote several prose works among which are “The Danites in the Sierras,” which was drawn from his experiences in the mines; the characters were taken from life, he himself being the Billy Piper; “Shadows of Shasta;” “Memorie and Rime,” and ” ’49, or the Goldseekers of the Sierras.” Miller also wrote several plays which were produced with success upon the stage; notable among them is “The Danites.” He died February 17, 1913.