This lesson has the student write the story of David the Shepherd Boy as it is told in the Bible. Here is what my daughter wrote. I noted in the Instructor’s Guide, “Answers will vary. Each student will be different as far as how much detail they put into their stories. My daughter wrote three pages double-spaced, but then she added a lot of detail and dialogue.” 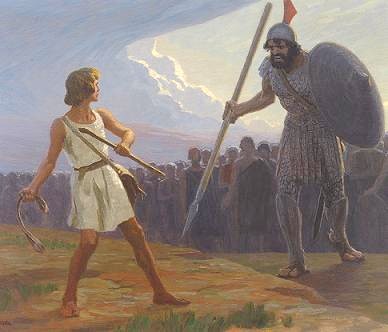 All I remember is the Philistines were at war and which ever side won got to take the other side as slaves.

Then one day, David came by the camp to check on his brothers (I think that is why he went by). While he was there, Goliath came and dared the Israelites to send one of their best men to come and fight him. When no one stepped up, David asked his brothers why no one would stand up to Goliath. They said there was no one brave enough to face him. David knew he had to do something.

So, he went and picked out five small smooth stones and then took his sling and went to face Goliath.

When Goliath saw that David was going to fight him, he just laughed and said, “Is this your best man? hahaha!” David looked at him and said, “I am not afraid of you, for I know God is with me.” He then took one of the five stones and put it in his sling. With one swift move, he flung the small stone at the giant man and it hit him right in the middle of his forehead.

David cut Goliath’s head off with his own giant sword.

The Israelites rejoiced in their victory.