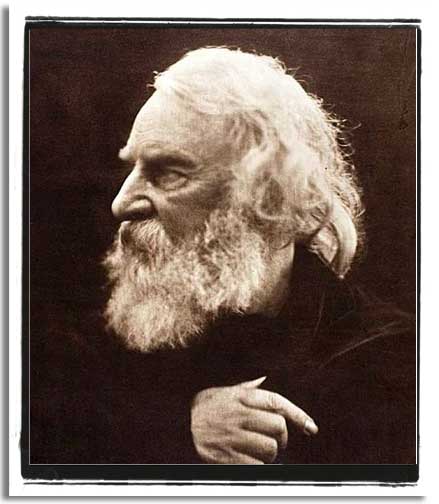 Longfellow, the poet, was born in Portland, Maine, in 1807. His father was at that time a young man of well-trained and well-balanced mind, was counted a thoroughly good lawyer, and was a man highly regarded by a large circle of the best people. His mother was a gentle-tempered, graceful woman of like character as her husband. Mrs. Longfellow was the daughter of General Wadsworth, and when the future poet was born, and when she came to give him a name, her heart went out tenderly toward her gallant brother, Lieutenant Henry Wadsworth, who, before Tripoli, surrendered his life while bravely serving his country.

Henry Wadsworth Longfellow was born in a house which is still standing on a street of Portland, Maine, and which is well known to every attendant at the public schools in that city. The story is told how some years since a teacher in one of the public schools, after giving many lessons on Longfellow’s beautiful life, asked her pupils if any of them knew where the poet was born. A little hand went up in a hurry, and a small voice piped forth, “In Patsey Connor’s bedroom”—Patsey Connor being at that time one of the occupants of the old Longfellow house.

Not far from the home of the Longfellows, in Spring Street, there stood a small brick schoolhouse, presided over by Ma’am Fellows, a most exemplary lady who had taught school for many years and had grown gray in the practice of rigid discipline. She was a firm believer in the idea that “one should never smile in school hours,” and she exercised her views on this topic very much to the terror of the young striplings who were placed under her charge. “My recollections of my first teacher,” said the poet after the lapse of threescore and ten years, “are not vivid; but I recall that she was bent on giving me a right start in life; that she thought that even very young children should be made to know the difference between right and wrong; and that severity of manner was more practical than gentleness of persuasion. She inspired me with one trait—that is, a genuine respect for my elders.”

For some reason—it is forgotten what—the boy did not remain a pupil of Ma’am Fellows; and after the first vacation he was sent by his parents to the town school on Love Lane, where he remained just two weeks. He was then placed in a private school, presided over by Nathaniel H. Carter, and continued to be a pupil at this school until Mr. Carter became an instructor in the Portland Academy, at which time he attracted many of his old pupils, including Henry Wadsworth, to his new field of labor.

A little later Longfellow came, in this academy, under the strong and beneficent influence of Professor Bezaleel Cushman, a man of brilliant parts and just the sort of man to arouse an ambition for learning in a young boy.

Under such an inspiring teacher Henry Longfellow’s progress was rapid, and in 1821 he was able to enroll his name as a freshman in Bowdoin College. He was then in the fourteenth year of his age; and the fact of his being ready at such an age for college, though not unprecedented, was early, even for that time, when colleges were less exacting and boys more precocious than now.

Already the boy had given evidences that led others to the expectation that his would be a literary career. While yet in his ninth year, he wrote his first verses. There is a tradition that his teacher wanted him to write a composition, a task from which the boy very naturally shrank.

“You can write words, can you not?” asked the teacher.

“Yes,” was the response.

“Then you can put words together?”

“Then,” said the teacher, “you may take your slate and go out behind the schoolhouse, and there you can find something to write about; and then you can tell what it is, what it is for, and what is to be done with it; and that will be a composition.”

Henry took his slate and went out. He went behind Mr. Finney’s barn, which chanced to be near; and, seeing a fine turnip growing up, he thought he knew what that was, what it was for, and what would be done with it.

A half hour had been allowed the boy for his first undertaking in writing compositions. Within the prescribed time he carried in his work, all accomplished, and surprised his teacher with a poem. This poem is not in existence, though a poem purporting to be this has often been published.

When young Longfellow was barely thirteen years of age, and still a pupil at the Portland Academy, he composed a bolder effort, which is still preserved in manuscript, entitled “Venice, an Italian Song.” The manuscript is dated, “Portland Academy, March 17, 1820,” and is signed with the full name of the author.

The first published poem of Longfellow’s was on “Lovewell’s Fight.” It was composed while he was attending the academy, just after he had been reading an account of the French and Indian war. Having written it to his taste, and copied it neatly on a fresh sheet of paper, it suddenly occurred to him that it was worthy of being printed. The young author had never yet seen aught of his compositions in type, and, unlike many young writers of later day, he was extremely shy about making a beginning. But the persuasion of one of his schoolfellows overcame his modesty; and so, late on a certain evening, he mustered up courage to go and drop the manuscript into the editorial box of one of the two weekly newspapers then published in the town. He waited patiently for the next issue of the paper, and was not a little chagrined to find when it appeared that the poem was left out. Several weeks went by, and still the poem remained unpublished. In a fit of disgust the young author, yet only a lad of thirteen years, repaired to the editorial sanctum and demanded the return of the insulted manuscript. The request was granted, and Longfellow then carried it to the editor of the rival newspaper, the Portland Gazette, by whom it was at once accepted and published. From that day the young poet was at liberty to print in the columns of that journal whatever he might happen to write; nor did he permit the opportunity to slip by unimproved.

In Bowdoin College Longfellow came under the touch of at least one man who was a great genius in imparting knowledge; this was Professor Parker Cleaveland, who was the glory of Bowdoin for more than half a century. It is of this “grand old teacher” that Longfellow speaks in a sonnet written during his visit to Brunswick in the summer of 1875:

“Among the many lives that I have known,
None I remember more serene and sweet,
More rounded in itself and more complete.
Than his who lies beneath this funeral stone.
Those pines, that murmur in low monotone.
These walks frequented by scholastic feet,
Were all his world; but in this calm retreat
For him the teacher’s chair became a throne.
With fond affection memory loves to dwell
On the old days, when his example made
A pastime of the toil of tongue and pen;
And now, amid the groves he loved so well
That naught could lure him from their grateful shade,
He sleeps, but wakes elsewhere, for God hath said. ‘Amen!’

At the time of his graduation Longfellow was nineteen years of age. So full of promise was his future that, only a few months after his graduation, he was chosen to fill the chair of modern languages and literature in his alma mater. So it was his manhood begun before his youth had scarcely ended.

Longfellow wrote a great many poems for us. He is called “the children’s poet,” because he was very fond of children and enjoyed having them come to visit him. He would tell them wonderful stories or let them look at his books and pictures. They also enjoyed watching the clock which had been made famous by the poem, “The Old Clock on the Stairs.” They loved to have him take them into his garden and show them the old elms. In his poem, “Children,” he calls the children “living poems” and invites them to come to him.

Longfellow had two sons and three daughters. In “The Children’s Hour,” he tells how his three daughters would come into his study when it was growing too dark for him to work. He was always ready for them then, either with a story or with some other amusement; so he called it “the children’s hour.”

“The Song of Hiawatha” shows how familiar he was with Indian legends and customs.

Longfellow loved birds and wrote many poems about them. Among these are “The Emperor’s Bird’s Nest,” which tells of a great king’s kindness to a swallow, and “The Birds of Killingworth,” which shows how some foolish people were punished for killing all the birds.

Near his home was the blacksmith shop and close by it the large chestnut tree that he tells about in “The Village Blacksmith.”

The children of Cambridge loved Longfellow so much that they gave him an arm-chair on his seventy-second birthday. This chair was made from the wood of “the spreading chestnut tree,” which he describes in “The Village Blacksmith.” He wrote the poem “From My Arm-chair” to thank the children for their kind remembrance.